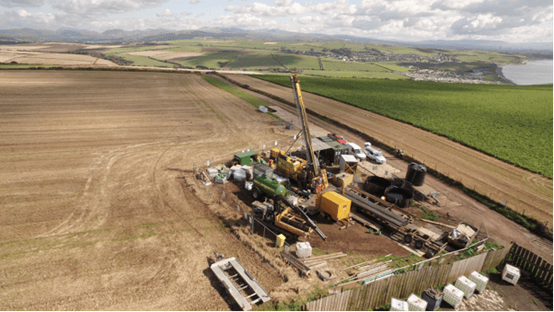 Vertical and Directional Drilling of onshore and offshore boreholes, including 3 core drilling

Drilled 4No boreholes to a depth of between 500m to 750m using a combination on ‘Chip Drilling’ in the upper 2/3rds of the borehole and core drilling 3HQ in the bottom 1/3rd.

Due to the presence of Coal Bed Gas Method a passive diverter was used.

Drilled 1No Directional Borehole with an Atlas Copco CT20 Rig M58 to a linear depth of 1,300m using a combination of ‘Chip Drilling’, ‘Navi-Drilling’, & 3HQ Core Drilling collaring the borehole at 30deg off vertical steering it out from on-shore out under the Irish Sea having Navi-Drilled it out to an angle of -22deg off horizontal using a passive diverter for CBM Gas Control.

Drilled 1No Borehole with a Hanjin D&B35 Multi-Australian Spec Rig M48 to a vertical depth of 850m from a Jack-up 1.5km off-shore using a combination of ‘Chip Drilling’ & 3HQ using a passive diverter for CBM Gas control.

Drilling 6No Boreholes with a 2No Hanjin D&B35’s Multi-Australian Spec Rigs M48 & M60. 1No Borehole was a directional drilled borehole from land out under the Irish Sea to a linear depth of 900m using a combination of ‘Chip Drilling’, ‘Navi-Drilling’, and 3HQ Cored drilling and 5No vertical boreholes all onshore to a vertical depth of between 650m to 850m all of which were drilled through a passive diverter for CBM Gas Contro.