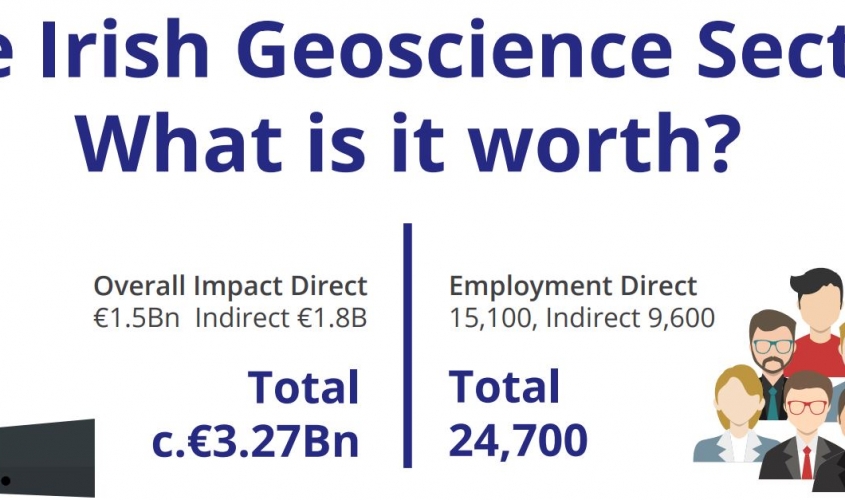 The Economic Review puts a value of €3,277m on the overall economic impact of the sectoral outputs for 2016, across the areas of Geotourism & Geoheritage, Groundwater, Extractive Industries, Geoscience Research and Geohazards.

Geoscience Ireland (GI), the business development cluster of 34 geo-scientific and engineering companies (supported by GSI and Enterprise Ireland), was valued at €827M; groundwater yield is approximated at €480M and the INFOMAR marine mapping programme as over €24M.

Employment figures calculated for the same year, across the same subsectors, come to 15,110 direct jobs and a further 9,629 indirect and induced jobs for a total of 24,739. In August this year, GI surveyed its (then) 33 Member Companies which reported total employment figures exceeding 3,200 (of which over 1,800 were employed by Small and Medium Sized companies (SMEs)).

Commenting on the report Minister Kyne said, “I greatly welcome this new report which gives us firm figures on the value of the Geoscience Sector, one that may be sometimes overlooked and yet is clearly very significant. In terms of employment, it is worth noting that these are generally high-end professional jobs and that much of the activity, being linked to Geotourism and Natural Resources, is located throughout the country and not concentrated in our cities”

Koen Verbruggen, Director of Geological Survey Ireland, added: “This report is very encouraging and will be vital in planning a new strategy for GSI. The figures show a healthy economic recovery in the Geoscience Sector, but also a significant growth in areas such as Geotourism and Research and the need to plan and prepare for Natural Hazards such as have occurred lately with flooding and landslides. The specific calculations of impact of GSI backed initiatives such as INFOMAR and the Geoscience Ireland business cluster is also a strong validation of our current programmes”

The new report was compiled from CSO figures and other sources by Indecon International Economic Consultants and is available for download at Geological Survey Ireland’s website.