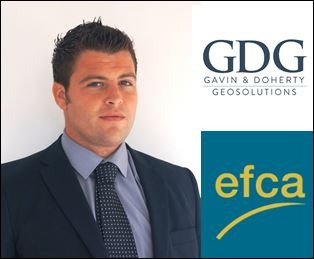 The European Federation of Engineering Consultancy Associations (EFCA) has announced that Paul Doherty of GDG Geosolutions is the winner of the eighth EFCA Young Professionals Competition.

Paul (31) is the Managing Director and one of the founding partners of specialist geotechnical engineering consultancy, Gavin and Doherty Geosolutions (GDG).

Paul project managed the winning entry “The Irish Rail Cutting and Embankment Decision Support Tool Project”. He developed and successfully delivered the final software programme that is now one of the most sophisticated risk ranking systems used by transport network managers worldwide. He presented the project at the EFCA 2017 conference on June 1st-3rd in Copenhagen.

“GDG, a member of Geoscience Ireland (GI) since 2014, is an exemplar of innovation and excellence in geotechnical engineering. The Rail Embankment project had previously won the Geoscience Ireland Award from Engineers Ireland and also won an award from the Association of Consulting Engineers of Ireland. Paul is a valued member of GI’s Steering Committee. Originally a UCD campus company, GDG has grown rapidly in recent years and collaborates with other GI companies on a regular basis. I am delighted to congratulate Paul and GDG on their latest achievement.”