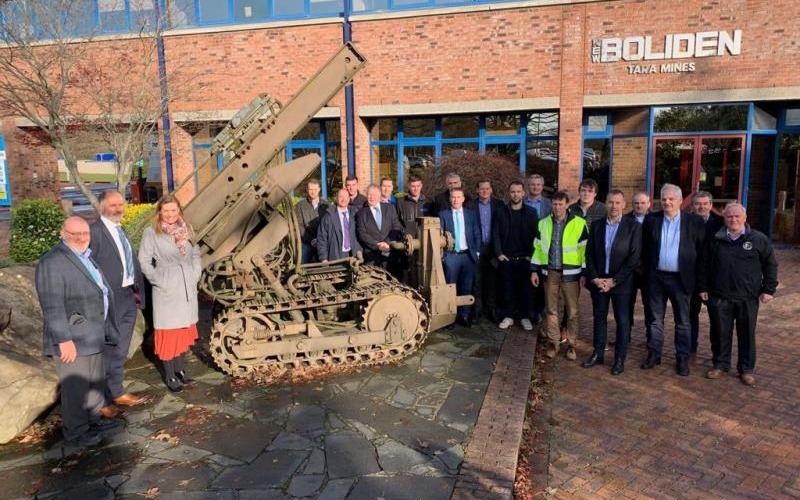 The two year level 6 Apprenticeship is sponsored by Geoscience Ireland and will be delivered by the Institute of Technology, Carlow. Minister English noted that geo-drilling , a highly skilled occupation, is central to the geoscience underlying infrastructure development, housing, mining, quarrying and  groundwater supplies and emphasized the government’s commitment to developing more apprenticeships. The Minister had earlier been responsible for the development of the SFI funded  Irish Centre for Research in Applied Geoscience (iCRAG).

Eoghan O Neill, HR Manager for Boliden Tara Mines in welcoming the apprentices, employers and agencies supporting the scheme, noted that Tara is committed to apprenticeship development and will deploy four candidates in the initial group of twelve commencing studies at IT Carlow in January 2020.

Dr Frances Hardiman, Head  of Engineering at IT Carlow  emphasised that IT Carlow has a long track record in providing apprenticeship training in construction and engineering skills and welcomed the addition of drilling to that skill set.

Koen Verbruggen , Director of Geological Survey Ireland (GSI) described drilling as the “truth machine” in determining the facts when testing theories and suppositions about what lies beneath the subsurface- a necessary but sometimes disappointing activity!

The Steering Committee for the Apprenticeship was drawn from employers ( drilling companies and mine and quarry operators), Irish Water,  the Federation of Group Water Schemes, GSI, the Irish Mining & Quarrying Society(IMQS)and SIPTU. In thanking the Steering Committee, Sean Finlay of Geoscience Ireland (GI) noted in particular the contribution of Brian Byrne of IT Carlow; Brendan Morris of IMQS and Stephen Walsh of GI who acted as coordinator for the Apprenticeship on behalf  of SOLAS, IT Carlow and GSI. He also acknowledged the support of Engineers Ireland , The Institute of Geologists of Ireland, the Construction Industry Federation and the Irish Concrete Federation. In thanking  Tara Mines , he noted the company’s enduring success over 42 years and wished Boliden continuing success in developing the recently discovered “Tara Deep” resources.