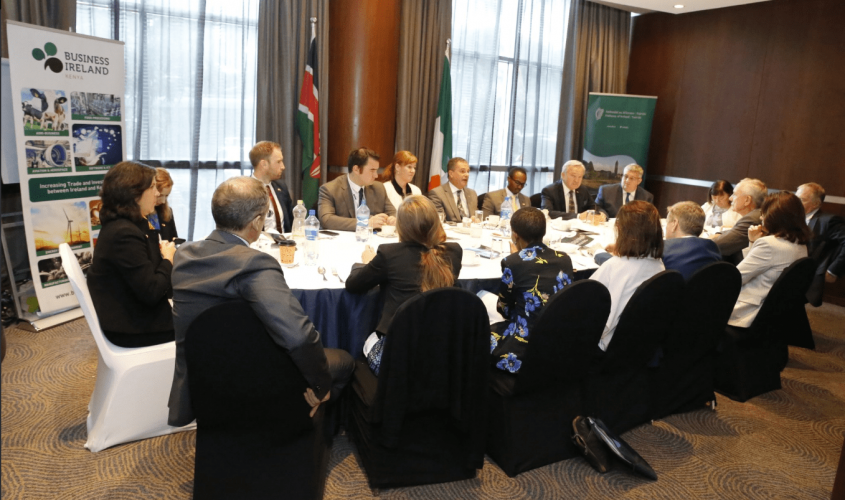 In November 2018, Geoscience Ireland (GI) led a Market Study Visit (MSV) to Ethiopia and Kenya with the support of the Department of Foreign Affairs and Trade and Enterprise Ireland.

The MSV was based around the European Investment Bank (EIB) and United Nations Industrial Development Organisation (UNIDO) organised ‘Africa Day’ on the 22nd of November in Addis Ababa and the ‘Blue Economy’ conference in Nairobi from the 26th to the 28th of November. The Kenyan leg of the MSV programme coincided with the attendance of Pat Breen TD, Minister of State for Trade to Nairobi. The Minister of State delivered a number of speeches at the ‘Blue Economy’ conference.

Along with colleagues from Nicholas O’Dwyer Ltd and JB.Barry Consulting Engineers, GI created links between key stakeholders in government and the private sector in both countries in order to enhance GI’s knowledge of the opportunities available in two diverse and growing markets.

As a market, Ethiopia is currently undertaking numerous massive infrastructure projects aiming to become a favourable investment destination. The European Investment Bank’s (EIB) ‘Africa Day’ highlighted the scope of the envisaged investment that is being planned over the coming years. This year’s EIB Africa Day focused on the theme of sustainable industrialization in Africa, and emphasized the importance of inclusive and sustainable industrial development for the continent’s future.

Kenya is another emerging market in terms of infrastructural development potential. The International Development Association (IDA) has a portfolio of approximately US$6.5 billion distributed between 27 national (US$5.3 billion) and seven regional (US$1.2 billion) projects in Kenya. During GI’s time in Nairobi, a series of meeting between the Ministry of Mines and Petroleum, the Ministry for Energy and the Geothermal Development Company, an SPV of the Kenyan government for the advancement of geothermal energy development in Kenya.

If you have any queries in relation to the MSV then please direct them to stephen.walsh@gsi.ie.